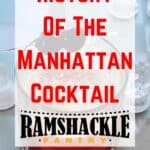 There are two primary legends about Manhattan cocktail history. Not shockingly, both have stories originating in the New York borough of Manhattan. Both have origins around the 1860 – 1880 time period.

The most famous origin story of the Manhattan cocktail originates with a New York private social club aptly named The Manhattan Club. Now, the Manhattan Club was not just the 19th century equivalent of a ravers paradise. The club was created as the Democrat’s political answer to the Union Club, which was founded in conservative ideology.

When you think of an ol’ boys club, these kinds of things are literally that. Popular legend 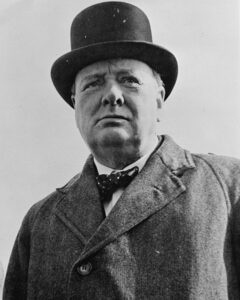 “Winston Churchil” by Cambodia4kids.org Beth Kanter is licensed under CC BY 2.0

The supposed host of this event, Jennie Jerome, asked for a special cocktail to be made for this event and Dr. Iain Marshall obliged with a drink that was a hit. Soon, thereafter, people started asking for the Manhattan Club drink and the drink they have at the Manhattan.

Jennie Jerome also has significant historical importance. Her first husband was Lord Randolph Churchill. They bore two children; one of which would grow up to be the Prime Minister of the United Kingdom… you guessed it… the British Bulldog himself, Winston Churchill.

First, I think it is fascinating that Winston Churchill’s mother was American born. I had not known that. Second, part of the mystique of Winston Churchill’s mystique is closely tied with an over indulgence of spirits. There certainly is some evidence to the contrary, but the witty man is often thought of as an over indulger. This Manhattan cocktail legend is very interesting to me because of the tie of a man known for his drinking and that he is thought to be so directly tied to the invention of such a famous American cocktail.
It has been subsequently proven an inaccurate legend, as records show Jennie Jerome to be 8 months pregnant (with Winston) during this event and in Europe. So, while it really is a neat thought that the avid drinker and person of historical importance is somehow related to The Manhattan, it just is not so.

This does NOT exclude the Manhattan Club origin story, however. According to History of the Manhattan club; a narrative of the activities of half a century , published in 1915, the Mahattan Cocktail was “was inaugurated at the Club” and not directly attributed to the man, it points to a person named David Gilbert. As far as I can tell, this person was a person who amassed a fortune as a NYSE trader and retired. He then spent a good amount of time involved with the Manhattan Club and apparently working on cocktails.

Toward the beginning of prohibition, a book was published named Valentine’s Manual of Old New York. In this book they took the account of a man named William F. Mulhall, who was a bartender at a famous cocktail spot named The Hoffman House for many years, starting in 1882. It seems like the purpose of the interview was to get a good description of the bar scene of New York before the government banned spirits.

“The Manhattan cocktail was invented by a man named Black, who kept a place ten doors below Houston Street on Broadway in the sixties — probably the most famous mixed drink in the world in its time.”

I like that this account gives a time and place in one of the oldest, largest towns in America. What a great opportunity to look further into the Manhattan cocktail history! With the help of the good people at Reddit’s Ask Historians I found a map of what the likely street addresses were in the 1860s.

Given these street addresses, Mulhall’s account and some Google Fu, I think I uncovered further clarity to the possibilities of the Manhattan cocktail history. I have gone through and tried to search each of the addresses that may qualify as ‘ten doors below Houston on Broadway.' This gets us to between Houston and Prince Street on Broadway.

This research was a bit trickier than I thought, as there are so many variables. Buildings get torn down. Records are not necessarily easy to find. Multiple businesses could have been at each street address. Mulhall himself was recounting information from decades before. Mulhall himself indicated that the cocktail was created in the 60s.  He did not become a bartender until the 1880s. And who knows, maybe there were lots of pop up, or unregistered, saloons. Finally, I am pretty good at research, but am not a historian. I don’t know what variance in detail and perception that might be skewing my opinion.

So, based on Mulhall’s account, I have come up with two possible locations where the Manhattan was created.

Stanwix Hall - The place where William “The Butcher” Poole was shot

For any of you who are into movies, William Poole was the man who inspired Daniel Day Lewis’ character in the movie The Gangs of New York. Stanwix Hall was the location where Poole was shot and happened to be located at 579 Broadway.  This is right in the vicinity of where Mulhall was describing, below Houston on Broadway.

The shooting of The Butcher was in 1855, a bit before the 1860s. At least we are getting to the vicinity of the area and possibly individuals who may BE or know who Black is. I found a good New York Times article referenced here that solidifies the location of Stanwix Hall. The article even names people who may have been regulars at that time. There was not any link between the named individuals and the nickname ‘black.’

There is some evidence that the building was rebuilt in 1860.  I cannot answer if Stanwix Hall continued to stand through the 1860s.

I think that it may be fair guess that Black was a bartender at Stanwix Hall and the origin of the Manhattan cocktail lies there.

A man named “Professor” Jerry Thomas was head bartender at The Metropolitan Hotel in the early 1860s. The esteemed "professor" published the first mixed drink book in America. The book is called How to Mix Drinks or The Bon-Vivant's Companion.

There is some controversy about this, he is also known for inventing the famous cocktail, the Tom & Jerry, as well as producing the first written Tom Collins recipe. Who knows, perhaps he employed and managed the man we know as Black.

Given the history of this location and that it is known for having connections to other cocktail origin stories, I don’t think it is out of line to find the origin of the Manhattan cocktail history at The Metropolitan Hotel.

Who would have guessed that the Manhattan cocktail history might have such rich connections in history? I am not sure that I believe any single of the origin stories I have shown more than the next, but this drink did start being mixed somewhere and by someone. It is only fitting that this cocktail royalty has such a storied past. I have given a reasonable amount of information to help you form your own opinion and perhaps narrow possibilities of the Manhattan cocktail history.