Angostura bitters used to only be an oversized label in my fridge. Usually located right next to the Worcestershire sauce, I would pull them out when I made a Manhattan. Since this deep dive, I know that Angostura bitters don’t even need to be stored in the fridge. Rob Roys, Old Fashions and the Sazeracs are all examples of great drinks that call for bitters. I have also come to a better under understanding and appreciation for what bitters are, just how complex they are, and why it really is magic flavor in a bottle. We will explore what bitters are. We will also look into a bit of bitter history (I am sure there is an in-law joke here somewhere). Finally, we will look at Angostura bitters and why they are as prolific of a company as they are.

Bitters is an alcohol based flavoring that has been infused with barks, flowers, berries, citris, and any other number of 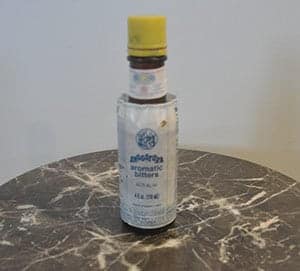 ingredients. We had previously talked about vermouth and in many ways, bitters seem like they have many similarities. Lots of flavor! Unlike vermouth, aromatic bitters are generally not drinkable by themselves, as they are are quite pungent. For this reason, you can may find bitters in stores that cannot sell alcohol.

While the primary concoction is meant to not have any distinguishable main flavor, there are several variations that are meant to do just that. Citrus bitters, such as orange flavored bitters, are common. You can now find bitters of all flavors. From Fee Brothers Black Walnut Bitters to Ms. Piggy’s Peppercorn Bacon Bitters.

There is a class of bitters called digestive bitters. These are meant to be drank neat or over ice. One such brand that falls under the class of digestive bitters is Jägermeister. Think about the gravity of this statement … Jag bombs may be good for you*.

Like vermouth, bitters may have a medicinal history. The hocus pocus of past medicines had a foundation in roots, berries, barks, and the stuff that was available to them…. Nature. There is evidence that the use of bitters goes back to ancient Egyptian times. While these drinks may not closely resemble the Angostura bitters of today, the use of similar ingredients, for similar medicinal reasons, shows a good historical connection.

In the 19th century, the cocktail came into prominence. And it seems unclear why bitters specifically started being used in cocktails, but I think some reaches can be made.

In both cases, there is a combination of medicinal and pleasure reasons for consuming bitters. Perhaps aromatic bitters seemed like a healthy and natural combination at the time? A transition to mixed drinks may just have been a 19th century cocktail meme.

Bitters were being used in America in many cocktails by the late 1800s. Professor Jerry Thomas is known as being the first person to publish a mixed drink book in 1862. In it, there are references to bitters 38 times. Bitters become an essential part of any American bartender’s arsenal during the 19th century. There were a number of bitter producers in the US.

Prohibition happened and it changed the cocktail world. It did not stop the industry, but certainly curtailed the advancement of the bottled arts and stifled bitter manufacturing.

There are many different bitters available throughout the world, and I encourage to find one you like. You can even make your own!

The most popular and widely available bitter in the United States are Angostura bitters.

Originally a medicine created in 1824 to alleviate stomach ailments, according to the company. This took place in the Venezuelan city of Angostura (now known as Ciudan Bolivar), the company's namesake.

In the mid 1800s, they started exporting Angostura bitters to the US, England, and the Caribbean. On the label today, you will see a mark indicating an award they won at the 1873 Vienna World’s fair.

By 1875, Angostura had moved to the Port of Spain, Trinidad. This is where the Angostura bitters factory remains today.

I think if there is one unsuspecting necessity of a home bar, it is Angostura bitters. There is a big punch of flavor in just a few dashes and can add an enormous amount of depth to cocktail recipes.

*This is in no way to say that Jägermeister should be consumed for health reasons or any other reason other than in moderation and within the realms of sanity. I shall not be held liable for anything. Furthermore, if you display such symptoms that are close to Happy Fun Ball symptoms, see a doctor immediately. Drink responsibly!