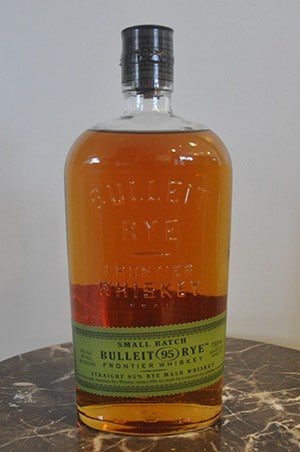 Not too long ago, I was at a McChainabee’s for a work event cocktail hour and thought I would give their Manhattan a try. I even let the bartender choose the whiskey (they didn’t ask). It only took one drink of that headache in a glass to remind me how important ingredients are. I am going to examine the key ingredient of whiskey and why I choose rye whiskey as the best choice for this drink recipe. Also, I will look at the Bulleit brand of rye whiskey and why they make a great product.

First, we need to clarify that both rye and bourbon are whiskeys. The difference between rye whiskey and bourbon is the grain with which it is mashed. Bourbon is made with corn and rye whiskey is made with rye. I did not realize this, but the federal government has laws that distinctly identify different kinds of alcohol.

“Whisky” is an alcoholic distillate from a fermented mash of grain produced at less than 190° proof in such manner that the distillate possesses the taste, aroma, and characteristics generally attributed to whisky, stored in oak containers (except that corn whisky need not be so stored), and bottled at not less than 80° proof, and also includes mixtures of such distillates for which no specific standards of identity are prescribed.

And here is the line that clarifies what bourbon and rye whiskey are:

“Bourbon whisky”, “rye whisky”, “wheat whisky”, “malt whisky”, or “rye malt whisky” is whisky produced at not exceeding 160° proof from a fermented mash of not less than 51 percent corn, rye, wheat, malted barley, or malted rye grain, respectively, and stored at not more than 125° proof in charred new oak containers; and also includes mixtures of such whiskies of the same type.

Be wary of Canadian whiskey

Actually, maybe just be discerning about any whiskey you buy. Just know that the laws in America are a little more stringent than Canada. My understanding is that they have to use very little rye, maybe even none, if it is to be labeled as rye whiskey.

Straight whiskey? Isn’t it all straight?

Another cool federal regulation designates the term “straight” as something special. This regulation requires that all whiskeys labeled as “straight” to “have been stored in the type of oak containers prescribed, for a period of 2 years or more”

What does all this mean in a rye vs bourbon discussion?

If you are an American, you likely eat corn byproducts on a daily basis in the form of sugar. It is the base for many substitute sweeteners. Corn contains a lot of sugar, particularly in contrast to rye. In the end product of the alcohol, this translates to bourbon being a much sweeter libation. The barrels that store the whiskey also contain some level of sugar. This can also bleed into the whiskey and give both bourbon and rye whiskey some sweetness, but this can impact both spirits.

Rye grain and tends to have a less sweet, spicier profile. Not that it is exactly the same, but imagine a piece of corn bread vs rye bread. Rye usually has a bolder flavor. Maybe not even a flavor that everybody loves, but can really be special if done correctly. That spice ends up in the rye whiskey.

What does this mean for a Manhattan cocktail?

The Manhattan cocktail already has sweet elements, such as sweet vermouth. It has a maraschino cherry in it, and if you are like me, you like to get a smidgen of the Luxardo cherry juice in the drink. It is already a fairly sweet drink and if a Manhattan drinker wants to counter that sweetness, rye whiskey is a great way to go.

I will also use a bourbon on occasion, but I think the better balanced taste profile can be had with a rye whiskey over a bourbon. Instead of sucking on a candy drink, you can better get the distinct spicier flavor of rye whiskey along with the sweet that is already present in any Manhattan.

Bulleit is my rye whiskey of choice. This rye whiskey has a cool American story behind it that dates back to the 1800s. They have won multiple awards. It is available all over the place. Finally, it has a whopping 95% rye mash bill. They are more noted for their bourbon and only released a rye whiskey in 2011, but they have made an impact in the rye world. If a person is going to adopt the theory that a Manhattan should have rye whiskey, why not embrace the flavor that a 95% rye mash can bring? Bulleit rye whisky fits the bill.

I will certainly try other whiskeys, but Bulleit has become my go-to for rye whiskey and Manhattan cocktail needs.

So, remember my story about being at the McChainabee’s? Don’t get me wrong… I still drank that Manhattan, but it was a good reminder on why ingredients matter and why I use a good rye whiskey for my Manhattans. The spices of rye can really balance out this drink that already has a sweetness to it.