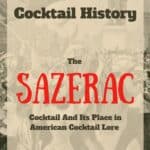 Most modern cocktail recipe books have hundreds, if not thousands, of drinks listed for the making. Few, however, have the lore and history of the Sazerac cocktail. I would argue that no other American cocktail, except MAYBE the Manhattan, can bring a person to a time and place like the Sazerac. Nineteenth-century New Orleans is calling and we can maybe catch a glimpse by celebrating the Sazerac. Today, we are exploring Sazerac history.

The Sazerac Really Comes Down To Brands

One thing that is unique about the Sazerac cocktail is that it has an origin story of brands. Somewhat like Moscow Mule history, but way older and probably a more interesting story. The “big bang” of the Sazerac really boils down to two main elements, The Sazerac Coffee House and Peychaud’s Bitters.

Antoine Amedie Peychaud was a New Orlean’s business owner in the early to mid 1800s. Although originally from Haiti (a French colony at the time) he settled in New Orleans in 1795. He owned a Creole apothecary, which basically is an old timey version of a pharmacy. As we have discussed on my blog before, many old drinks and spirits have some origin in health. Bitters are no different. Would it seem odd that a pharmacy makes a healthy drink drink mixture? Nope. 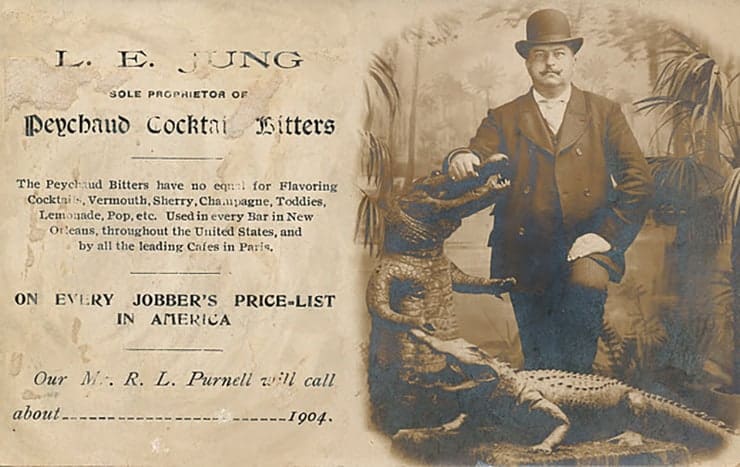 L.E. Jung was a later owner of Sazerac House and Peychaud's Bitters

Peychaud made a family recipe of bitters and served them up in drinks to friends and (maybe) clients. Legend is that he made a brandy toddy that included his bitters. We recently covered the Hot Toddy cocktail and you can learn about the origin of Toddy here. At some point, Peychaud connected with the Sazerac Coffee House. I am not sure how, but I do know Peychaud's apothecary would have been reasonably close to the Sazerac House. Where they friends? Was it a business arrangement up front? I don't have the answers to those questions.

The other element of this story is the Sazerac Coffee House. Apparently, the place was originally called The Merchants Exchange Coffee House. The man who owned it, Sewell Taylor, ended up selling it to Aaron Bird so that he could start a different business importing spirits. One of the spirits that Taylor imported was a brand of cognac named Sazerac-de-Forge et Fils.
Bird renamed the Coffee House after this brand and began serving the Sazerac with bitters from Peychaud and Sazerac-de-Forge et Fils Congac. The big bang of Sazerac History!
By all accounts, this happened around 1850, but I cannot put specific years on this. Sazerac brand claims that the drink was popular in 1850, which would elude to the creation of it prior to 1850.

The cocktail was once served with Sazerac-de-Forge et Fils cognac, but that is no longer the case. What happened?
Money happened, that is what. Cognac is a distilled wine that is made in a specific region of France. Around 1870, there was an epidemic of Phylloxera in France. Availability became a serious issue and made cognac very expensive. Cognac was likely very expensive to begin with, as it had to be imported.
Do you know what was available in abundance in the United States and was very popular at that time? Rye Whiskey. So, as a matter of money and availability, the coffee houses and The Sazerac Coffee House made the switch, permanently, to rye whiskey over Sazerac.

Absinthe has a really interesting history and I think I am going to tackle this as a subject in its very own post, but it certainly has a place in Sazerac History. If you remember reading our series on the gin and tonic, there was an incident in gin’s history called Gin Madness. Absinthe really has some shared history in this regard, but they didn’t shake the stigma, unlike gin, until very recently.

In the late 19th century and early 20th century, many people vilified absinthe. It was said to make people crazy and do unspeakable things. The suggestion was that the toxic properties of wormwood made people go cray cray. The extract of the plant can cause animals to die, but only in very high doses. If drinking absinthe, a person would die from alcohol poisoning far before hitting toxicity levels of wormwood that could do damage.

More than likely, the stigma more came from the popularity of absinthe amongst the bohemian community. Absinthe was all the rage in the artistic community. The likes of Edgar Allen Poe, Vincent Van Gogh, Pablo Picasso, and Oscar Wilde were all absinthe drinkers. Can you imagine how the stiff, conservative folks might have taken to that? Maybe absinthe was akin to the Elvis Presley of the alcohol world? All the young, hip, whippersnappers loved it, but the grumpy society folks just couldn’t handle how it shook its hips.

Finally, nobody ever thought to attribute its impact on people to the fact that it contains quite a bit of alcohol? It is meant to be diluted and makes Rye look like Kool-Aid. Maybe that is why people did stupid stuff while drinking absinthe?

And so, many countries started banning absinthe. The United States followed suit in 1912 and the sazerac needed to find a different alcohol. Sazerac, the company, lists herbsaint as the ‘official’ ingredient of a Sazerac cocktail. Herbsaint was created BY Sazerac Company to replace absinthe. In fact, herbsaint is an anagram of absinthe. Clever, huh? Even after prohibition, it was illegal. The new spirit was made without wormwood and, hence, would not contain the supposed ingredients that make a person go mad. Even though Sazerac continues to list herbsaint as the ingredient, I struggle with using this as my original cocktail. I think I have to think about this one for a bit.

Here we are in 2018. Absinthe is now legal in most parts of the world, including right here in the USA. Protip: outside of potential risks of consuming ANY alcohol, it doesn't make a person go crazy. Sazeracs are served all over the country. And while herbsaint continues to be used and really is part of the tradition of the Sazerac, I think it is completely appropriate to use either herbsaint or absinthe in this cocktail.

Sazerac history is very interesting and really very American. It has a time (1850) and place (New Orleans) tied to its origin that is very distinctly part of American history. Even though the name, Sazerac, lends itself from a French Cognac, doesn’t it seem fitting that our immigrant origins borrow culture from over seas? We really are a people mostly made up of immigrants from other countries. It is fitting that Sazerac has a French origin that found its way to the French Quarter of New Orleans. Soon, we will be making our own version of the Sazerac. Sign up to get updates by email or follow me on Pinterest.