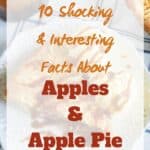 We are in the midst of our apple pie series and I love spending some time looking into the history and origin of what we are covering. Did you know that even though apple pie is considered very American, neither the apple or pie has an origin on our continent? There are many other interesting facts about apples and apple pies. Today, we are going to share ten shockingly interesting apple facts and talk about the history of apple pie. Enjoy our list.

I hope you found these tidbits of knowledge as fascinating as I do. I feel that learning about the history and origin of a food brings me closer to the recipes. Almost as if I have a better understanding of what I am eating. History brings a context to a dish that may not make it actually taste better, but give me an appreciation for why the dish is special. I think that the apple pie is absolutely a special dish. Even though it may not have origins in America, we really have embraced apple pie as our own and it has become an American icon.