Touching on the Music and Spirit of New Orleans

We usually talk about food, recipes, history, and food heritage here at Ramshackle Pantry. I thought it would be fun for our New Orleans Sazerac series to include a post about music that is tied to either the town, the cocktail, or the spirit of the Sazerac. New Orleans has such a rich and full musical history that I don’t think I can really do a deep dive into anything New Orleans without at least mentioning the topic of music. So, enjoy some of the music and media that I associate with New Orleans!

While this song does not directly mention New Orleans, it has been adopted by the city. Originally an American hymnal, it was adopted by the jazz community, which has strong ties to New Orleans. It is also the New Orleans Saints fight song.

This Rock n’ Roll legend does have some songs about New Orleans, but he is probably more tied to the city as being born and raised there. Known for songs like Blueberry Hill and Ain’t that A Shame, Fats Domino was a father of rock and roll. He influenced The Beatles and Elvis Presley referred to Fats as The King of Rock ‘n Roll.

House of the Rising Sun by The Animals

This is absolutely one of my favorite songs of all time. I even was able to see Eric Burdon perform several years ago and got to meet him. It really was a fun day and I enjoy other Animals music as well.

Not my favorite song of Tom Waits, but I do love the man.

I had to include some street jazz, as that always comes to mind when I put music and New Orleans in the same breath.

While my list is super small, I hope that next time you go to your home bar to make your best Sazerac, you have a nice little list of New Orleans inspired artists and songs to help you on your cocktail journey.

Finishing up our Sazerac Deep Dive 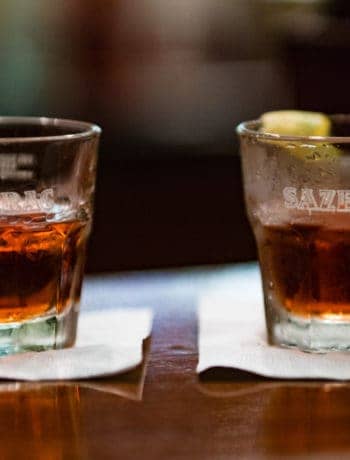