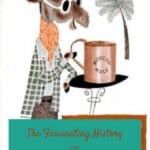 Today, we are talking about Moscow Mule history as part of our Moscow Mule cocktail series. You have had the popular drink, right? The one that comes in the copper mug with a squeeze of lime? Sure, you have. Or, at least you know what it is. Like all of the cocktails we review on Ramshackle Pantry, this is an awesome drink. Unlike the cocktails we have looked at thus far, the origin of this drink is relatively recent.

First, let’s get the most surprising thing out of the way. It did not originate in Russia but in Los Angeles. Also, there is no mule in it, BUT it does have a little bit of a kick. The history of the Moscow Mule was a very intentional marketing strategies by two companies that were trying to infiltrate difficult markets.

The history of most cocktails tends to have several different origin stories. People are trying to market something or maybe attain a little bit of glory. There is some of that going on with the Moscow Mule, but all of the origin stories revolve around two characters. John Martin, owner of Smirnoff Vodka and a man named John Morgan, who created a brand of ginger beer named the Cock’n Bull.

If you look at the wiki pages or search the internet, you might find several different stories. I did quite a bit of research and was following several different paths until I found a video of John Martin discussing the history. To me, that is gold. If there were other origin stories that did not include John Martin and John Morgan, I might be a bit skeptical, but it doesn’t seem like the man has much to gain.

His story is what I believe to be the truth. Here is the video. Even though I have it placed at the Moscow Mule portion, it is worth watching the whole thing.

Smirnoff Vodka and the Moscow Mule

John Martin bought Smirnoff Vodka in 1939 and was looking for ways to market it in the US. Whiskey was so instilled in the American mindset that it was difficult for other spirits to break into the market. So, Mr. Martin was trying to find a way to sell his vodka.

Cock’n Bull and the Moscow Mule

The other person in Moscow Mule history is a man, John Morgan. Morgan produced and sold a ginger beer named Cock 'n Bull. John Morgan also owned a very popular bar on Sunset Strip with the same name, Cock’n Bull. Over the years, until it's closing in the late 80's, the bar was frequented by the likes of Jim Morrison, Richard Burton, and Rod Stewart. Even though the bar was popular, his venture into ginger beer was not going so well.

He was trying to break into the market and Americans did not like Ginger Beer, preferring its nonalcoholic cousin, Ginger Ale. I did not even realize this until recently, but there is a difference between Ginger Ale and Ginger Beer. Ginger Ale is basically ginger flavored pop/soda. Ginger Beer, on the other hand, is a fermented concoction that originates with ginger, sugar, and water. It can be less carbonated and contains more alcohol than Ginger Ale. Generally, however, Ginger Beer does not contain that much alcohol.

The Cock'n Bull Bar also has a pretty cool history and can be checked out here.

As indicated in the video, Morgan and Martin met at the Cock’n Bull Bar in 1940 explicitly to make a drink together. They both wanted to promote their products and wanted to make a drink that would help both become popular. That evening, these two characters and Morgan’s girlfriend, Ozaline Schmidt, sat down and invented the drink.

Martin indicated that he was not quite sure where the ‘Mule’ part of the drink came from but was pretty sure that it had something to do with ‘a kick.’

Why is a copper mug used for a Moscow Mule?

One of the really interesting things about the Moscow Mule is that it has its own glassware, the copper mug. But, how did that originate? This is where Ozaline Schmidt came in. The story is that she owned a family copper mine that had recently been passed down to her but was unable to sell the copper.

Being part of the discussion, the copper mug was included in the cocktail. One story that I had read and is somewhat believable to me, but unconfirmed, was that there was a point where copper mugs were the mugs that were used at the Cock’n Bull. Not just for Moscow Mule cocktails, but for all drinks served in a mug. I don’t know that to be true, but an interesting side story.

The summary is that someone with a copper mine was at the table when it was created.

Smirnoff Vodka was not produced during WWII, so even though the Moscow Mule was invented in 1940, the founders did not really start marketing it until after the war, which ended in 1945.

Martin started promoting the product heavily again after the war. If you watch the video (I highly recommend doing so), Martin talks about the difficulty in marketing the Moscow Mule. Apparently, a real problem was getting bartenders to serve the drink. His solution was to bring in one of the new-fangled Polaroid cameras and woo the bartender into making one and in exchange, he would give them a processed photo to bring home. The bartenders loved the drink and the cool new gadget. Then, Martin would take a second picture and bring it to the next bar. I suppose showing a bartender that the competitor has one up on them helps sell the drink! Does anybody else remember when you had to bring ALL your photos in to get processed? lol.

I found a Smirnoff ad in a 1950 Life Magazine indicating how to make the Moscow Mule and it is the featured image. It is very interesting and it shows the popularity of the drink. Of particular interest in the ad is that it seems to offer itself as a flavorless alcohol for other traditional drinks.

Well, apparently, it started to take off into the golden days of the Moscow Mule.

Moscow Mule Falls out of Favor

I suspect that Smirnoff stopped pushing the cocktail as much. It was commonplace for people to order Vodka Martinis (pushed by the James Bond movies) and the need to use the cocktail just was not as important to the Smirnoff brand.

While there is a Cock ‘n Bull Ginger Beer today, I could not find much information about the connection between the brand of the 40’s and the brand that exists today. Today’s Cock ’n Bull certainly has the name and claims the Moscow Mule history. There definitely is a relation and I could find some information about people looking for this beer in the early 2000s, but nothing concrete and the company did not respond to my questions. I am sure they are busy.

What I do know that during my time as a bartender (which I stopped doing in 2003), I never once was asked about a Moscow Mule and I did not know what it was. Granted, it was a college spot, but I lived around the drinks and did not know about it.

The Resurgence of the Moscow Mule

We can sort of pinpoint when this drink became popular again in the timeline of Moscow Mule history thanks to Google Trends. In about 2014 the Moscow Mule started having a moment.

I have a few guesses as to why it has become popular again. First, the drink tastes good! Second, this is during the time when hipster stuff was in vogue and it seems like like a thing nowadays to reconnect with cool stuff from long ago. Why not the Moscow Mule?

The Moscow Mule is an integral part of the story of vodka in the United States. Surprising, right? Moscow Mule history was really just one big marketing push by a couple of guys trying to make their companies work. And it seemed to really work, particularly for the Smirnoff brand. No matter the reason that it was created, it is a drink that many people love and certainly has a place in my home.