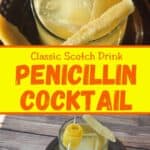 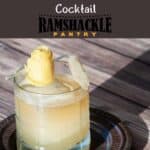 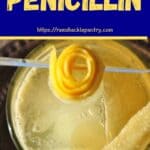 The classic Penicillin Cocktail is a great drink for those just being introduced to Islay scotches or someone that like a hint of smokey flavors. Between the honey, scotch, whiskey, and lemon, this drink comes together as a favorite. Give this Penicillin Cocktail Recipe a try.

Today we are covering a modern classic with a Penicillin Cocktail Recipe. What makes this drink a modern classic? That the drink was created in 2005 and has become known in cocktail bars across the globe is a great start. Additionally, the Penicillin tastes effin good. I am not going to pretend that this is a light drink. It is not. It is a hearty cocktail that is just a few steps shy of drinking whisky by itself.

This is a whisky drink, through and through. In fact, this cocktail has two kinds of whisky. Additionally, it has a ginger syrup and fresh lemon juice. What some consider a strong whisky burn is cut into with sweetness and fruity flavors.

I feel that this drink has the spirit of straight whisky but is something that can be enjoyed by those who aren’t quite at the point of appreciating a straight finger of the good stuff. It is sweet, has zap of ginger, and a whisky punch.

The cliff notes that are important for this cocktail is that Isley Scotch Whiskey is a regional whisky of the island of Isley. It is specifically brewed on that island. One of the things that makes it stand out is the smokey flavor.

The grains used in distillation are dried with peat fires from the island, which was a longstanding energy source on the island. It is also what lends that peaty, smoky, or cigar-like flavor to the scotch.

This isn’t to everybody’s taste. When I was young man, I would go out for coffee. I would get that coffee and fill it with cream and sugar. Now that I am a bit older, I prefer my coffee black.

I appreciate black coffee. I am not sure that I would appreciate it like I do without the cream and sugar from my youth. Perhaps that is what the Penicillin can be to would-be peaty Scotch drinkers.

This cocktail stands on its own, but one thing I really appreciate about it, is that it can serve as a bridge to appreciating peaty scotch. It has the sweetness and whisky flavors that many like, but it dampens what some consider to be a harsh hit of smoke flavor in Islay Scotch.

We previously made a homemade Ginger tea and for this recipe we are going to amp that up a bit. Ginger tea is not really tea, but just ginger infused water. So, when we mix together honey with this ginger water, we end up with a honey syrup. It is almost a simple syrup, but with honey and ginger flavors.

The recipe is shaken like many cocktails. One of the interesting things is that it has a layer of that Isley Scotch on top. If you don’t know how to layer drinks, it isn’t hard and here is a video that will get you going!

History of the Penicillin Cocktail

This cocktail really is a recent one, created only in 2005. It was created by Sam Ross at a New York Bar, Milk & Honey. Milk and Honey eventually moved and Ross opened up shop in the same space as Attaboy, which also has a location in Nashville.

According to Punch Drink, Ross’ recipe was a riff on another cocktail created at that bar called the Gold Rush, which has roots in one of the longtime classic drinks, the whiskey sour. I have not covered this one yet, but I am sure it is coming.

You can find out more about Sam Ross and Attaboy any time! Since this is a modern classic and not something hidden way back in the golden age of American cocktails (mid to late 1800s), the players are still active and out there putting in work.

This Penicillin Cocktail recipe tastes like dessert that has been on a whisky bender. I would particularly encourage you to try this drink if you want to experiment with scotch, but are afraid to just get it alone or a splash of water.

It has great flavors, but still imparts some of the really interesting aspects of peaty whisky to your palate. If you try this drink and like it, please let me know! Also, make sure to subscribe to get updates via email and share this recipe on Pinterest.

This drink won't cure any diseases, but the Penicillin Cocktail will sure make you feel better. Embark on the experience of making this modern classic cocktail!

Total time is 5 minutes, but it takes more time to make the ginger syrup needed for this recipe.