The Beginning of Pizza As We Know It

While cooking flatbread and putting toppings on that flatbread dates back to ancient times, today I am only going to talk about the kind of pizza most of us think about. You know the one. It generally comes in a circle (or maybe rectangle). It has tomatoes and cheese on top. Other toppings might be added. As we already discussed in the big list of styles, the Neapolitan is the godfather of pizzas.

This pizza is not that old. I was SHOCKED to learn that the pizza we know is a relatively new invention. The tomato isn't even native to Europe. The tomato was brought to Europe from South American in the 16th century and was believed to be poisonous. It quickly became a food for the poor. Isn’t it funny how many of our great food products, such as lobster, molasses, rum, and tomatoes, begin as food for the poor and enslaved?

And so, tomatoes were eaten by the poor. Incidentally, so was flatbread. Pizza quickly became a common food among the common people. There are many practical benefits to pizza. It cooks very quickly, as Neapolitans only take a minute or two to bake. The dough really is only a few ingredients that would have been widely available, even among the poor. It is also versatile, in that you could put whatever was available on top. Finally, people could eat the dish on the move.

Most reports indicate that the modern pizza had its ‘big bang’ in Naples, Italy. So, among the common people, pizzas were being eaten in Naples. Antica Pizzeria in Naples is widely regarded as the first pizzeria that was opened in 1830 and still is slinging pizzas!

Pizza really hit the jackpot when served to royalty. In 1889 King Unberto I and Queen Margherita were in Naples and were served a pizza. The chef served what we now know as a Margherita Pizza (like the Queen... get it?), with tomatoes, basil, and mozzarella cheese! Not by coincidence, the pizza contained the colors of the Italian flag. 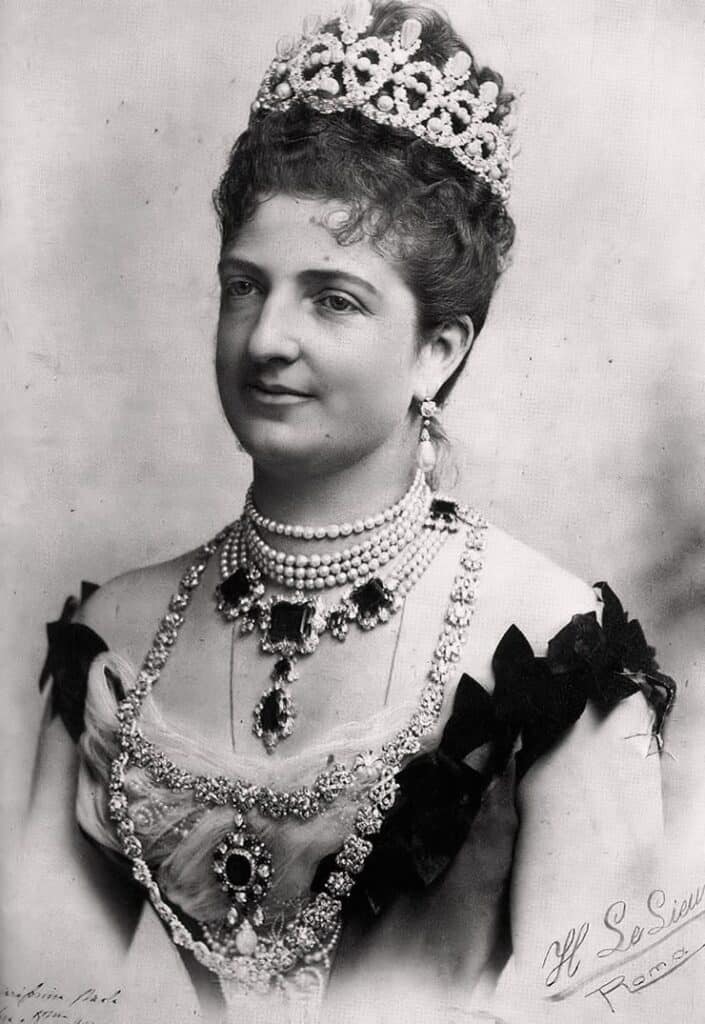 How Did Pizza Get to Chicago

This is an easy one. As Italians immigrated to the United States, so did Italian dishes. From New York to Chicago to Philadelphia, Italians immigrated and brought food. They brought Pizza. The first pizzeria in America was Lombardi’s in NYC, but pizzerias sprung up all over the place. Chicago was no exception.

The pizzerias were not making Chicago style deep dishes, though. They were making Neapolitans and New York Pizzas. So, how did the Chicago style pizza pie come to be?

Finally, we get to the nitty-gritty of the history of the Chicago deep dish pizza. By most accounts, Pizzeria Uno is where the magic happened. Opened in 1943 (under a different name) by Ike Sewell and Ric Riccardo. Ike Sewell was a college athlete and a businessman. He is most known for opening Pizzeria Uno but also opened a few other restaurants. He also worked at and moved up the ranks at Standard Brands until his retirement in 1965. It was almost as if the guy didn’t have time to cook. Hmmm… well, we will get to that.

According to Chicago Eater, Ric Riccardo was already a successful restaurateur and owned a place called Riccardo’s Restaurant and Gallery. The two sought out a business venture together. First, legend has it that they were pursuing a Mexican place until Riccardo tried the food and it did not settle with him.

And so a pizzeria opened in 1943 and they served the first Chicago style deep dish to the public, but it was not Pizzeria Uno at the time. Originally, it was called The Pizzeria and then Pizzeria Riccardo. After the success of these pizzerias, they opened another shop just down the street named Pizzeria Due. Due is the Italian word for two. And so, in 1955, when Pizzeria “TWO” was opened, they renamed the original to Pizzeria Uno. Now, I would assert that it is fairly likely that something like the Chicago deep dish was being served in households, but most credit Pizzeria Uno as being the originator.

Debate Over the History of the Chicago Deep Dish

You know how professors sometimes get credit for the work that their graduate students do? Well, some of that might be at play here.

Sewell was a full-time salesperson at a corporation. Riccardo had other ventures going on. Both were businessmen and innovative, but did they invent the Chicago deep dish all by themselves? Maybe. I certainly have my doubts as to whether the recipe came out of Sewell. He seemed to be more of a finance guy AND he had a full-time job. Do you think the guy who once wanted to open a Mexican restaurant was busy experimenting in the kitchen with pizza?

Riccardo would have been the one to come up with it if either did. He was already in the restaurant business and spent his days doing that. Although, many have doubts as to whether he spent much time in the kitchen either.

There is definitely debate as to whether Riccardo or Sewell created the dish, but perhaps was a creation of their employees. Or, perhaps, even a combination of things that developed into the recipe that helped develop the Chicago Deep Dish. Two people have entered as main characters in the debate over the creation of the Chicago style deep dish.

Once again pointing to the Chicago Eater article, Adolpho “Rudy” Malnati was an employee of Riccardo and Sewell. At a minimum, he was a very loyal employee. At most, he was an unacknowledged owner who created the recipe. According to BBC reports, Malnati was a part of the equation before Sewell even entered the picture of Pizzeria Uno. They assert that Rudy and Riccardo slung slices on the corner trying to sell their wares.

They report that Malnati, single-handedly, came up with the recipe. The Chicago Tribune reported Minalti as being listed as the tenet of the building. They also report he is listed as a co-owner and operator.

Malnati’s son also worked at Uno's and was co-manager until he opened his own pizzeria, Lou Malnati's. Additionally, another Malnati son, and Lou’s half-brother, opened up Pizanos. Interestingly, the claim on Pizano’s history page is that Milnati established Pizzeria Uno. It reads:

“One of the pioneers of pizza’s inland movement has been Rudy Malnati, who in 1943 established Pizzeria Uno on Chicago’s near north side.”

There is no doubt that Rudy Malnati had a role to play in the history of the Chicago deep dish, but did he invent it? I don’t know. It seems reasonable. Did the Malnati family get hosed out of a stake in Pizzeria Uno? I dunno, but there definitely seems to be some drama going on with that history.

Some claim that Alice Mae Redmond, a previous chef at Pizzeria Uno, developed the dough recipe for Pizzeria Uno and possibly the inventor. She did, in fact, work at Pizzeria Uno. Then, she went to work for Gino’s East in 1966 when they opened (by the way, they ship their pizzas).

I have found several reports indicating that she worked at Uno’s for 17 years prior to the 1966 opening. That would be 1949, but the restaurant opened in 1943. So, there is a bit of a discrepancy, assuming that the deep dish was a part of the original menu. In the same Tribune article from 1989:

“When Alice Mae started in the Pizzeria Uno kitchen, she didn’t like the crust. `It was too hard to push,` she says, slowly shaking her head. `I had to make that crust better.`”

I suspect Alice Mae Redmond did change the formula of the crust to help make it is what it is today, but I don’t think she invented the deep dish pizza or the crust. No matter what, Redmond is an instrumental piece in the history of the Chicago deep dish pizza.

I think it is a fairly solid statement to say that the history of the Chicago deep dish pizza started at Pizzeria Uno. Who, exactly, invented the Chicago style deep dish? Where is the original 1943 menu and recipe? What was the arrangement between Rudy Malnati and the owners of Pizzeria Uno? What was the dough recipe was before Alice Mae Redmond and after Alice May Redmond?

Does it even matter what person created it? Perhaps it had to be a part of a time, place, and group of people. Maybe if those things all didn't come together at Pizzeria Unos in the 1940s, there just wouldn't be the Chicago deep dish pizza. Maybe Alice May Redmond took something that was already good and helped propel it to a higher plane of pizza nirvana? Still, it was in Pizzeria Uno's kitchen.

I doubt that I will ever get to see the answers to some of the questions I have, but that doesn’t change the taste of a Chicago style deep dish pizza, does it? Nor does it change the almost universal notion that the Chicago style originated in Pizzeria Uno's kitchen, no matter what person(s) developed the recipe.

The history of the Chicago Deep Dish pizza is likely going to have some unanswered questions and that is ok.  What I do know is that now I want to go to Chicago and explore all of these pizza places myself! Perhaps I might find the answer at the bottom of a pizza pan? If not there, I bet I can find it at the bottom of a tall beer? Ok, probably not, but I would like to give it a try, anyway.