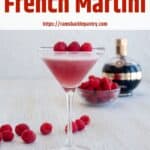 The French Martini brings some fantastic fruit flavors together for a delicious package of adult beverage bliss. This cocktail is simple and easy to make, but it tastes like someone has been working on it for a long time. Pineapple juice matches so perfectly with raspberry liqueur and vodka for this cocktail thriller and there is no reason that any adult shouldn’t try this modern classic at least once.

This really is such a simple drink. We combine all of our ingredients into a cocktail shaker filled with ice. Then, we shake, shake, shake, that bad bad boy. The shaking serves the purpose of cooling down the drink, but it also adds almost a slight froth and texture to the drink that you would not get from serving the drink stirred.

Then, pour the cocktail into a chilled martini glass. Does the martini glass need to be chilled? Probably not, but unless all of my ingredients are cold and the vodka is kept in the freezer, I tend to like my martini glasses cold.

If you are interested in some other great cocktails, check out this RumChataTini Cider Cocktail or Appletini.

What Vodka Should I Use?

First and foremost, I say use what you like! I am, however, fairly opinionated on vodka. Vodka shouldn't be complicated. The thing about vodka in many cocktails is that it is supposed to hide behind the other flavors. We want vodka to be a neutral spirit and that is literally how the US code defines it:

“Vodka” is neutral spirits so distilled, or so treated after distillation with charcoal or other materials, as to be without distinctive character, aroma, taste, or color.

As price-conscious individuals, we tend to always have a bottle of Kirkland’s finest around and use that for many of our drinks. Another vodka that I am very fond of is Smirnoff.

While I am sure there are plenty of Vodka snobs out there who would disagree, I think Smirnoff is a great neutral spirit. It does the job and it has a neutral taste. We use it in our authentic Moscow Mule and I wouldn’t be afraid to use it in any cocktail where the purpose of the vodka is to get hidden and it isn’t the star of the drink.

Chambord is such a lovely raspberry liqueur. While it is low in alcohol percentage, it has a wonderful and vibrant taste. If there is any liqueur that tastes most like fresh raspberries, I would say it is this.

The Chambord brand began in 1982, but claims ties to a liqueur from the late 1600s and history with Louis XIV. Just by looking at the opulent bottle, it would appear that the tied into history would make sense. This seems to be a marketing strategy rather than something really founded in facts.

I would not be surprised if there were a raspberry liqueur in the late 1600s and that maybe Louix the XIV drank some of it. This correlation does not mean it was a recipe that had a direct lineage with the Chambord we know today. It is a nice bottle of liqueur that is probably more related to the 1980s than the 1600s.

These days, it is owned by Brown-Forman, the same group that owns Jack Daniels.

This is not the most inexpensive bottle of booze, but I would recommend that every home bartender has a bottle of it stashed somewhere in the liquor cabinet. First, so you can make a French Martini whenever you want, but also so you can pour a small cup to sip every once in a while. It is that good.

Ok, So It Really Isn’t a Martini, But So What?

A proper martini has some mixture of gin or vodka and vermouth. In the tradition of such martinis as the Cosmo and the Appletini, the French Martini follows the same example by taking liberties with the word, martini. Perhaps, because it is served in a martini glass, we can then call it a martini? No matter the reasoning, history has decided that we call this one a martini.

History of the French Martini

As with the Moscow Mule history, we have seen cocktail marketing campaigns create classics. And sure, some bar probably started making it first… sometime after 1982 when Chambord started being produced. If we are to presume that a French Martini absolutely needs Chambord and not some other raspberry/blackberry liqueur, it would have been created after 1982

This is a relatively recent drink and invented in the 1980s. Like many cocktails, there is a bit of mystery where this drink originated. Some claim that it was created in the bars of a popular NY restauranteur, Kieth Mcnaulty. Others claim it was a genius marketing campaign to promote Chambord. I think either of these could be true.

Tips for Making a French Martini

Products I Used While Making the French Martini

This French Martini cocktail is such a great, fruity Chambord drink. If you love raspberries and pineapple, get out your cocktail shaker for this modern classic.

Did You Make a French Martini?

Awesome! I really hope you liked it. This classic cocktail is really a great drink and one to keep. It has a wonderful fruity flavor profile and doesn’t need many ingredients. If you liked this recipe, let me know in the comments section below, tell your friends on Pinterest, share on Facebook, and write a letter with the recipe to your cocktail-loving aunt that doesn’t have the internet. Of course, we would love for you to get updates and you can do that by signing up for email updates from the banner on this page.