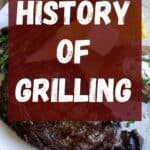 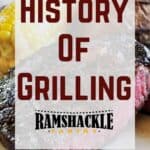 Talking about the history of grilling is sort of like talking about the history of mankind. Perfect discussion for our grilling series. We have intentionally cooked meat over fires for about as long as fire has been domesticated. I mean, it isn’t like our caveman ancestors were stopping by Safeway to pick up a sirloin and then plop it in the refrigerator for a few days. They found food and cooked it. While this is a subject that really deserves a few books of content, today I am going to give a brief overview of the history of grilling.

Before we start really diving into grilling history, it might be good to step back and define what grilling is. Yeah, I know we all know, but I am going to stop for a second and get nerdy about words. Most of us have a sense of what grilling is, but I want to provide a definition just so we all come from the same place. I think the most succinct definition I could find, with some slight modifications from me, was from Rouxbe and is as follows:

Grilling is a dry-heat cooking method that is done over direct, high temperature heat. Food is cooked on metal grates that are placed over a heat source in order to produce a smoky, charred flavor. Grills can use gas, electricity, charcoal, or wood.

I suppose that you could also say that anything cooked on a grill is grilling, but I am not sure that is the whole story.

What is the difference between barbecue and grilling?

Some people use grills to smoke food items low and slow. For example, a person may use their grill to smoke a pork shoulder for several hours. While this might be done on a grill, I would say that it is more considered smoking or barbecuing than grilling. Because grilling, as we define it, needs high, direct heat. Grilling is separate from BBQ and smoking. Barbecuing could even be done in a pit in the ground, as traditional Hawaiians have done for a long time. It could be done in a smoker or another device. Still, there is a distinction between barbecuing and grilling.

Sometimes the two words are used interchangeably, but there is a difference. Grilling is usually done over high heat and involves relatively fast cooking, per the definition listed above. Barbeque is generally done over long periods under low heat. The idea with smoking or barbecuing is to cook the food, but also allow smoke to penetrate the meat, which can take a long time. Additionally, some cuts of meat, like the Boston Butt and Ribs are better suited for low and slow cooking methods.

While we might touch on barbecuing a bit in this series, the grilling we are going to focus on is how I defined it above. Direct, high-temperature heat meant to sear the outside.

The Ancient History of Grilling

At some point, our ancestors tamed fire. Can you imagine how it might have made life easier for people? It brought light to the darkness. Instead of running around at night without being able to see, you could have a torch? Tripping and spraining your ankle a million years ago might have made you the weak one of the heard and susceptible to getting eaten by lions or whatever the predator de jour was. Additionally, it could keep people warm in the cold, allowing migration to colder climates. Finally, it provided a way for food to be prepared that was previously not available. It made some food edible, easier to digest, allowed for boiling of water, and opened up a whole culinary world. It looks like we may have been cooking food over fire as far back as a million years ago.

One of the most simple accessible ways to cook meat is to just put it over a fire. So, while we use grates today in most grilling, our cavemen brethren were performing some very similar tasks when they put the meat over fire. We really have some deep roots in this sort of fire pit cooking and our oldest ancestors were performing a grilling of sorts.

Fast Forwarding to WWII and Grilling

Alright, just a second ago, we were talking about cavemen and now we are up to WWII? Yes. There are many things that happened between those two points in time, but our discussion today only needs to focus on a few points.

Humans developed stoves and ovens. The creation of these items allowed for consistency and culture around those kitchen staples. The kitchen became a central part of the house, but this really is a recent phenomenon. People started having a separate room for kitchen stuff. As modernity started to take over with the likes of electricity, refrigerators, and all of the other things that we start to see in today’s kitchen, it became a central place in a household. Having an inside kitchen that was away from the elements meant that people didn’t need to cook outside. By the early 1900s, outside cooking tended to be left to community special events, camping, and hobos.

During WWII, the government wanted a stove for military use. Something that troops could carry around. Coleman hit the mark and made the portable pocket stove. It was a hit among the troops and served well during WWII. It first was used in the US invasion of North Africa and became the military’s friend.

Following WWII, Coleman started to target this as a consumer item that could be used for camping. I think probably the most interesting part of this story, in relation to the history of grilling, is that it sort of reintroduced the idea of outdoor cooking in a modern capacity to many soldiers. These soldiers came home and had experience and feelings about how that method of cooking was being used. Yes, war is terrible and horrible, but it doesn’t mean that comradery and community didn’t happen in war. I believe that comradery and community had to sometimes occur around food and meals, sometimes supplied by the Coleman grill. I speculate that these men and women came home with an appreciation of the comradery that could occur around an outside grill.

Post WWII, Leave it To Beaver, and the Suburbanization of America

The GI Generation had grown up during the Great Depression and lived through World War II. There was a post-war affluence that was happening and a baby boom like few others. People started moving from the cities and rural areas to suburban areas where track homes and The Joneses lived. Whether you like to see the stereotype as Leave it to Beaver or a Norman Rockwell painting… this was at that time. 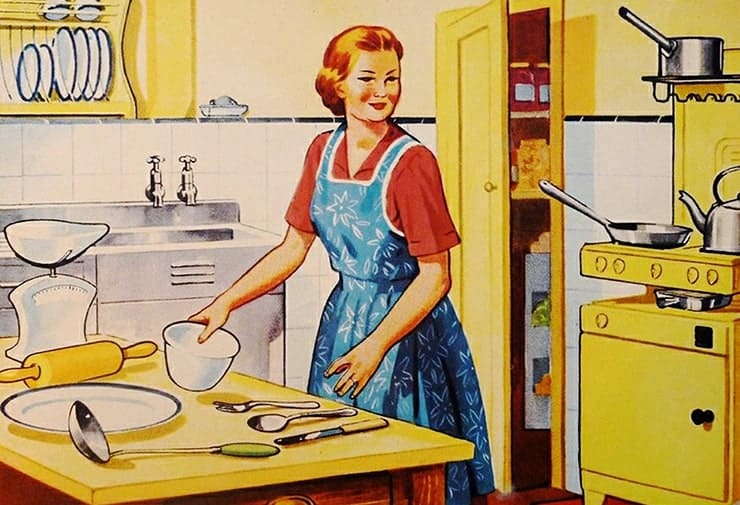 The same GIs that had once used the Coleman Pocket Stove in horrible times now had a backyard and were home with their new and growing families. Backyard grilling became all the rage.

The grill of choice following WWI was the brazier style grill. At the time, it was just a basic device. A place for charcoal and a grill grate raised above it. While it certainly could get the job done, it was not grilling in its final form. The food and fire were at the will of the elements. Wind impacts temperatures and can cause wide variations in flame.

One of the big drawbacks of that Brazier Grill of that time was that it didn’t have a cover.

Weber was originally a metal works company that was founded in 1887. George Stephen, Sr. was working in sales in the 1950s. At that time. His father ran the company. According to the Smithsonian, George decided in 1952 that he was going to create a better grill. At the same time, the metal works company was fabricating metal buoys. You see where this is going, right?

George changed up one of those bouys, put some well-placed holes in the material and we have a simple version of the modern charcoal grill! 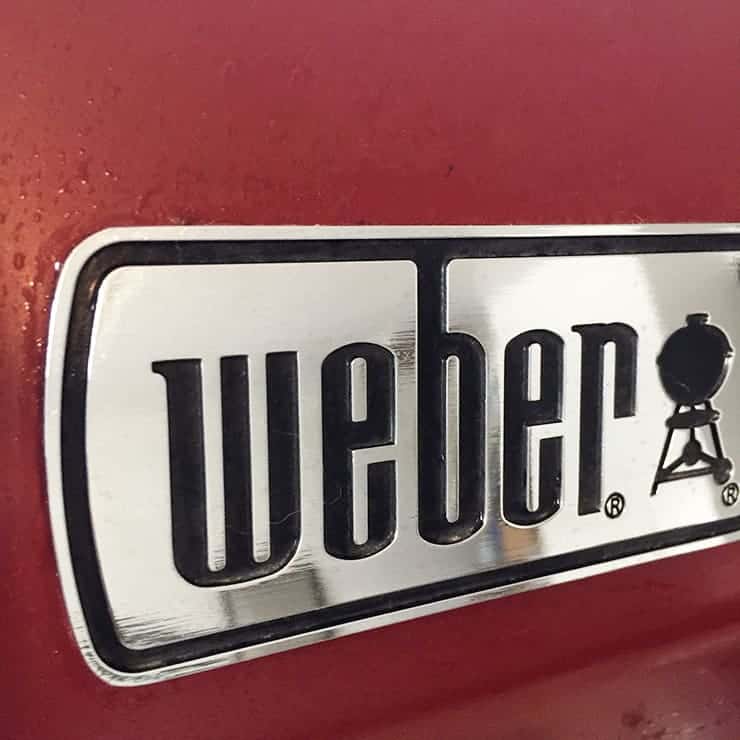 Gas Grills Not Far Behind In the History of Grilling

As quick as the charcoal grill took off, others started producing gas grills. Chicago Combustion Company started producing and selling portable gas grills in 1954 with the LazyMan. Today, Weber also has a full line of gas grills, including the Genesis that sits in my garage!

Wood charcoal has been around since ancient times and the idea of charcoal, in slightly different presentation, continues today. I wasn’t going to really include any charcoal discussion, but I found an interesting detail. The charcoal briquet was invented in 1897 by a man named Ellsworth B. A. Zwoyer. Zwoyer invented the charcoal briquet, but the interesting part of the story is tied to Henry Ford. Henry Ford (yeah… THE Henry Ford) was looking for a way to reuse items from his automotive assembly line. He worked with his friend, Edward G. Kingsford (see Kingsford or any place that sells charcoal) to make that happen. Henry Ford had a role in the history of charcoal and American Grilling.

Whew… it seems like we covered the entire history of mankind today, but the history of grilling is not a short one. How humans have cooked has changed so much over the years, but we still do have this connection with the earliest of our ancestors in grilling. So, next time you are cooking up a burger on your grill, take a second to think about how long man has been doing that exact same thing.