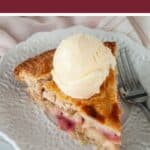 When Spring hits, the first garden produce I look out for is rhubarb, and this delicious Rhubarb Pie is one of my favorite baked treats. It is easy to make and has that signature tartness of rhubarb, but also make sure to balance it with enough sweetness to make it just right. Try this wonderful Rhubarb Pie recipe today.

What makes this recipe special?

Apples are a favorite in our house as Fall hits, but rhubarb is for Spring. This is a great recipe to make with your garden's bounty or use up the rhubarb you have in your freezer.

If it is just getting warm in your area like it is mine, it also means that grilling season is here. Enjoy this delicious pie as a dessert for a big ol' perfect ribeye steak, Blackberry Homemade BBQ Sauce Recipe on Grilled Chicken Thighs, or maybe these Bacon-wrapped Grilled Sweet Potato Fries. Of course, you can try this wonderful Strawberry Rhubarb Cobbler recipe.

Obviously, the star of this recipe is rhubarb, but it takes more than just rhubarb to make a pie.

Here are the ingredients:

I used purchased pie crust, but our Best Buttered Pie Crust recipe would be great for this recipe.

For as good as this pie is, the instructions are unbelievably easy. Most of the ingredients are for the pie insides. Mix all of them together and fill one pie crust with it.

Spread out the insides and cover your pie up with the second crust. Brush egg wash on the top and put a few slits in the top to help prevent the crust from puffing up.

Crimp or fold your pie crust and wrap the pie's outside crust with tinfoil or a crust guard. This helps make sure the crust does not burn.

Bake for thirty-five minutes once your oven is heated to 425° Fahrenheit. Remove the crust guard and continue baking until the crust is a light golden brown. About 10 minutes.

I used a pie crust guard when I made this, but tin foil works better for me. It doesn't look as pretty but works well.

This is not the most versatile recipe, but I have tried a few different variations that make sense.

Store covered in the refrigerator for up to one week. You could also freeze the pie as a whole, or in slices, and heat up later.

Rhubarb was used medicinally by the Chinese, Greeks, and Romans as far back as 5000 years ago. It started to become a prominent culinary ingredient in the 19th century.

Vanilla ice cream is perfect with this pie!

What time of year does Rhubarb Grow?

Rhubarb is a Spring vegetable but grows throughout the Summer.

Products used in this recipe

Did you make this recipe?

That is so awesome! I hope you love this recipe as much as I do. If you like this rhubarb pie, you could do me a favor by leaving a rating in the comment section below. This helps others decide if they want to make it and lets me know how I am doing. Most of all, thank you so much for visiting Ramshackle Pantry!

Rhubarb Pie is a delicious Spring and Summer dessert that is perfect with a scoop of vanilla ice cream. Tart rhubarb and sweet flavors come together in this wonderful treat.