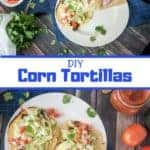 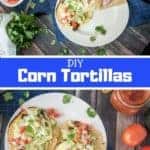 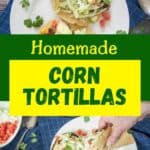 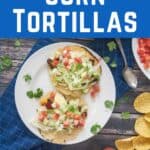 Do it like they have been doing it for thousands of years with this delicious homemade Corn Tortillas recipe. This is simple, flavorful, and something really special.

One of the most identifying and unique elements of enchiladas and tacos is the magnificent and delicious corn tortilla. That is what we are going to make today. Corn tortillas represent a long tradition of Mexican and South American foods that goes back thousands of years.

We originally posted this as part of our Enchilada Series and now we are revisiting and making this as the first recipe in our Taco Series. Today, we are going to make our own homemade corn tortillas!

When I started down this recipe path, I wondered if I could just mill some popcorn I already have to make a corn tortilla. I mean, one might think that homemade corn tortillas are made from corn flour. WRONG! Well, sort of wrong.

Corn flour is fairly close to what is used in tortillas, but there is a distinct difference. Masa Harina is the flour that we use in this recipe. It is different from corn flour because the corn is soaked in a lime mixture and then ground to flour. Corn flour is just finely milled corn, while Masa Harina is treated corn that is turned into flour.

Incidentally, the only difference between cornmeal and corn flour is how well it is milled. Cornmeal has a bit more weight to it and is… well, you know… mealy.

Nixtamalization of Corn - Why Lime Soaking?

It turns out that diets where untreated corn is a main staple often leave people malnourished. Treating it, such as how Masa Harina is made, allows humans to get more nutrition from the corn. The process of soaking and cooking corn in an alkaline solution, such as lime or wood ash, is called nixtamalization.

While we don't know exactly when this process started happening, it was a very important invention. Corn was a critical part of the diet of many people and without nixtamalization, people would end up with Vitamin B deficiencies and a disease called Pallegra, which can lead to death.

The natives of North and South America learned these techniques and that is part of the reason corn, and the corn tortilla became such an important part of early diets on these continents.

One thing I learned while making corn tortillas from scratch is that you need to knead your dough and then let it rest! If you do not, you are going to have a tough time rolling out your tortillas.

These tortillas are easy enough to make when the dough is right, but it can be a bit of a delicate process and we don't need things working against us. While I used my kitchen aid mixer (with the Beater Accessory... NOT the dough hook), you can knead this by hand, as well.

I put it in my stand mixer on low for 5 minutes and I would recommend a good 10 minutes of hand kneading for it to come out right. You should be able to somewhat tell when it is ready. Dough that is not kneaded enough feels a bit grainy, but the well-kneaded dough will have more of a Play Dough sort of feel. One thing to recognize is that if you are used to working with flour dough, this is much different than that and considerably more delicate.

Then, make sure to wrap it and rest it in the refrigerator for 30 minutes.

I am sure this would have been a much easier process with a tortilla press. I, however, decided not to purchase one (although a Victoria 8 inch Cast Iron Tortilla Press can be found on Amazon).

Instead, I just used a roller and it worked out pretty well. It took more time, but I am ok with that and that is how I am going to show you how to do this, as well. If you have a tortilla press, you can skip over some of this. For those of you who want to make corn tortillas without another kitchen gadget, I have you covered!

The end product may not have been quite as perfectly round had I used a tortilla press, but they were still great.

I have been making my own flour tortillas for quite some time, so cooking these were not that much different. I will say, however, is that this can require a little bit of practice, as these are a bit more delicate. If you allow them to cook too long, you can end up with a stiff board that tastes a bit more like a chip than a homemade corn tortilla.

Also, we put plastic on top and bottom to help keep the delicate dough together. This is not a dough to beat up, but one that requires a little extra care and attention. For example, after you roll it out, be a bit careful about removing the plastic wrap. While rolling it out, be a bit delicate with your rolling pin and conscious of how the tortilla is forming.

If they end up falling apart. That is ok. Just reform it into a ball and try it again. Have some patience with the dough and with yourself. Find a little tortilla zen.

Also, practice makes perfect. After a few at the right heat and the right thickness, you will have it down I was making some great little tortillas for any tacos or enchiladas.

Can I halve This Recipe?

We have two people in our house and six tortilla shells is plenty for us. I have found that halving this recipe works just fine.

I used a big cast iron pan I have for this and I feel cast iron is the preferential cooking pan. Because my cast iron pans are already seasoned, I did not need to add any oil initially.

After having it on medium high for so long, I did add a bit of cooking spray to keep the surface oil. Additionally, I used a thin metal spatula to handle the tortillas. Like many households, we have a handful of plastic ones. They just seemed too thick and made it difficult to handle these fragile little flowers.

Overall, I really loved making these and pretty proud with how they came out. This recipe will make 12, but I may experiment with size to make them a little bit bigger or maybe smaller. I made a great little homemade corn tortilla in much the same fashion that people did thousands of years ago.

Homemade tortillas are easy enough to make and this recipe should get you on your way to making a beautiful round of great corn tortillas. If you like what we are doing here, do not forget to subscribe to get updates via email and to follow me on Instagram.

Did You Try These Tortillas?

If you liked this recipe, you could do me a real solid by taking some time to let me know how it went. I always appreciate to hear from you and if you want to get updates from me, make sure to subscribe to my newsletter. Leave a comment and rating below.

Homemade tortillas are easy enough to make and this recipe should get you on your way to making a beautiful round of great corn tortillas. If you like what we are doing here, do not forget to follow me on Instagram.

Making your own homemade corn tortillas is both gratifying and makes for an excellent meal. This recipe is simple and really only needs a few ingredients.