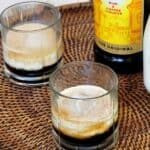 A hardy cocktail that we are going to make today as part of our White Russian series. We just looked into the interesting history of the drink and if you are curious about how this drink came about, check out that article. We love White Russian cocktails, and we have made a few spin-off recipes, but you just can't beat the classic drink.

Yes, we have made some great drinks inspired by this one, but today is devoted to our Classic White Russian Recipe that you should try today.

Vodka and the White Russian Recipe

This is a big drink, and vodka is not a big flavor, so the vodka brand is not that important. I am a fan of Smirnoff Vodka for most of my mixed drinks. If I were to drink the spirit alone, I might look a bit further at vodkas I want to try, but we are putting this in a drink with strong flavors. There is a strong coffee flavor, and the cream brings a heaviness to this drink that would likely hide the nuances of any vodka flavor.

Reach into your liquor cabinet and grab that vodka you would use on the regular. Keep the top shelf stuff where it is.

Coffee Liqueur and The White Russian

There are a few choices for Coffee Liquor, but I look to Kahlua as my go-to when it comes to this drink. It has a long-established history and really is a staple Coffee Liqueur. When I bartended as a job, it certainly got the most use out of all coffee liquors.

I don't even call it coffee liquor, but Kahlua. They are almost synonymous. There are other brands, like Tia Maria, which also has some historical claim to the drink. There are new kinds of coffee liqueurs coming out. As always, I say drink what you like and today I will stick with Kahlua.

What Kind Of Dairy In The White Russian

Use milk in a pinch, but let’s stay true to the heaviness of this drink and use heavy whipping cream. Half and half works, too. I certainly have used whatever was in the refrigerator when I didn’t have cream, but the cream can add a specialness to the cocktail.

The White Russian Recipe And Its History

Many of us know the drink from the famous movie, The Big Lebowski. This cocktail’s history has much more going on than just a movie, which we previously wrote about. The ratio for this classic cocktail is one to one to one! How did we get that? History.

The drink is one part Vodka, Kahlua, and cream. The first printed recipe for the White Russian was in the Oakland Tribune in 1965 and is the recipe we are sticking with. The White Russian is a relatively new cocktail, but to think about all of the things that came together to allow this drink to be made is pretty spectacular.

I have seen other recipes that call for a bit more vodka, and I have tried them. These recipes are wonderful, but the ratio I like is the historical one.

Layering or Mixing The Cream

I have seen the White Russian cocktail served two different ways. First, is the drink where cream is mixed right in. Second, is a recipe where the cream is layered on top. For this recipe, I am using the layering technique.

Either method is fine. The layered method will give a more interesting look, as the cream starts to intermingle with the other alcohols. It does, however, give a more separated flavor.

I generally use a spoon for layering, but if my ice cube is a big one rather than smaller cubes, slowly pouring seems to work, as well.

Difference Between a Black Russian and White Russian

The answer to this is simple. Cream. A White Russian recipe calls for cream, while a Black Russian has none. The original Black Russian was created in 1949, and eventually, the cream was added to the mix. So, if you prefer a Black Russian, just leave the cream out!

Did You Make This White Russian Recipe?

This Classic White Russian Recipe is like a double dessert of drink. If you have not had this vodka and Kahlua cocktail before, I suggest you run with this recipe. It is tasty.