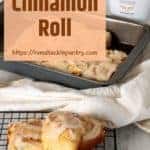 This recipe kicks a normie Cinnamon Roll up a few notches. First, we add that pumpkin. BAM! Then, we roll out some delicious and easy-to-make RumChata Glaze. BLAM! You love cinnamon rolls, but you will fall in love with this Pumpkin Cinnamon Roll Recipe with RumChata Glaze. Try the recipe today.

🎃 What makes this recipe special?

One thing I love about cooking is that sometimes it is so easy to take a traditional recipe, and you can make it special with just a few minor tweaks. That is what we are doing today. It is Fall, and we are getting our pumpkin flavors on with this roll recipe.

Also, I like an adult beverage occasionally, so we are getting our Rumchata on. We make it a bit more awesome by taking what we already are into (pumpkin and RumChata) and then mashing it up with a traditional Cinnamon Roll recipe.

If you have the time and inspiration to make cinnamon rolls from scratch, you should try this recipe. It takes just as much time as the traditional recipe and adds a neat spin on the classic.

We have some other great breakfast recipes like this Swedish Pancake recipe, this Dutch Baby Pancake recipe, or go all out with this Corned Beef Hash recipe. No matter what you make, make sure to treat yourself.

RumChata and pumpkins are the star in this recipe, but more than that goes into homemade cinnamon rolls.

RumChata is a tasty adult brand of drink. It is based on Horchata, which usually has cinnamon and rice in the recipe. Horchata has worldwide roots but often is connected with Spain and Mexico.

It sometimes contains alcohol, and in this case, it does. Drinking RumChata on the rocks is great and is like drinking Fall flavors, but adding it to a cinnamon roll is fun and memorable.

The glaze and filling for this cinnamon roll recipe is super simple, but the dough can be a little tricky. That is ok, however, as you have me to help guide you through the process. This should be fairly easy if you have made homemade roll dough in the past.

Before you start with the dough, my biggest tip is to have some patience while rolling it out and cutting the rolls. Making a consistent dough is important to make cinnamon rolls that are even and easy to handle. Adding the pumpkin is the easy part.

To make consistent rolls, you want to make sure that your sheet of dough is a nice rectangle where the dough is of equal thickness. We suggest dimensions of 15 inches by 10 inches.

We want 15 equally-sized cinnamon rolls. Getting these dimensions on point might take some work, but stick with it, and you will make an excellent pumpkin cinnamon roll recipe.

The filling is super simple to make. A little pumpkin, a bit more brown sugar, and a pinch of cinnamon. It really is that simple.

One difference between a traditional cinnamon roll and this recipe is that we add pumpkin to the filling. This turns the filling from a dryer filling to a wetter filling and can impact how easy it is to add the filling.

When you spread the pumpkin filling across our rolled-out dough, make it as evenly as possible. This will help ensure we get even cinnamon rolls for this cinnamon roll recipe.

Rolling the Dough into Rolls

Take a little bit of time with this. We want to make our big roll to be as even as possible. Our dimensions are 15 inches by 10. When completely rolled up, it should be 15", meaning that you should roll from the long side.

When rolling this up into a long tube shape, you may have some of the wet fillings that come out the end. That is ok, but try and keep that wetness away from the outside of the completed roll.

Making the outside wet just makes it a little more challenging to work with. I roll mine out on a cutting board and use a paper towel to remove any of the liquid that ends up on the cutting board. This separates dry from wet, which can help make the dough easier to work with.

I have tried to cut this with a knife, and it just doesn't work well. It might work if you have a spectacular and super-sharp knife, but I recommend using dental floss. Loop it around and cinch the roll into 15 equal parts. Don't be surprised if the first and last rolls are just a tad wonky.

I promised this would be easy, and it is. It is simple as melting butter, adding powdered sugar, mixing, and then adding a bit of RumChata.

A regular glaze is just powdered sugar, butter, and milk or cream. You could roll with just that and keep it a simple pumpkin cinnamon roll, but why do that when you are here for the RumChata glaze!

I suggest keeping these in the refrigerator for up to four or five days.

It is an adult beverage based on Horchata, a Mexican rice and milk drink.

That is awesome, and thank you so much for giving this Pumpkin Cinnamon Roll Recipe with RumChata Glaze recipe a try. If you could leave a rating in the comment area below, it would be greatly appreciated. This lets me know how I am doing and also helps others decide if they want to make this recipe. Most of all, thanks for visiting Ramshackle Pantry.

This Pumpkin Cinnamon Roll Recipe is a great take on the traditional breakfast roll or snack. We bring it one step further by topping it off with a delicious RumChata glaze that really makes this Fall treat something special.