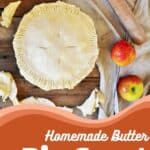 This is such a flavorful and beautiful pie crust. The thing about homemade pie is that I always want to make it memorable, and this Best Butter Pie Crust helps me make some perfect pies. If you want to make a delicious dessert, start with a great crust and give this tasty butter pie crust a try today.

🥧 What makes this recipe special?

A pie crust can turn a good pie into a great pie, and this homemade butter pie crust recipe will help you do that. This is the crust I have been using all throughout our Apple Pie series, but I wanted to give it its own place.

Pie crusts require fat, and people do use other sources of fat for their pie crusts. Lard and shortening are the most common, outside of butter. Butter is better because butter tastes freaking awesome, and it makes a great, flakey crust.

The problem with butter pie crusts is that it can be a balance to get right. The flavor of the butter and its ability to make a flavorful flakey crust make this pie crust so great.

Yes, this butter pie crust does make a delicious apple pie, but we are not limited to apples, are we? This crust can be used for any pie that calls for a traditional pie crust.

This crust makes two discs. Enough for one whole pie that has a top. If you need only one pie crust, say for a Dutch Apple Pie, just halve the recipe and make sure not to split it when the recipe calls for it.

Some of my favorite pies to make with this crust are my American Apple Pie, Blueberry pie, and Rhubarb pie. Of course, think about making some homemade ice cream. Make sure to treat yourself no matter what pie you make with this.

The measurements are important in this recipe, so make sure to check out the full recipe at the bottom of the page.

First, I want to make sure you get in the right place for making this crust. A butter pie crust can be a little tricky, but I am here to help! Get to your place of zen.

If you are anything like me, you did not grow up making homemade pie crusts. Baking hasn't even really been my forte, but I am getting there.

I do, however, want to help people like me make the best dang pie crust they can. I have worked really hard to provide this great crust recipe.

Ingredients and technique are important, but there really is something more to it. I feel that finding a place of zen is critical in making the best butter pie crust. I advise you to take a look at my Traditional Apple Pie post, where I also talk about the zen of making butter pie crust.

When I started making crust, I was very frustrated. In those early experiments, the raw pie crust was just unmanageable and so difficult to roll out. Cooling is very important, so I thought maybe that was the problem.

It wasn’t. Perhaps I wasn’t adding enough water to my pie crust? No. That was not the problem either, and adding too much water results in a leathery, flaky crust.

I just wanted the pie to work! Even though I was reproducing my recipe and fine-tuning it, I just could not get it to roll out the way I wanted. I would put down my balls of dough and cranked out my rolling pin to force the dough to do what I wanted. It was becoming so frustrating, which did not help things.

Finally, I did figure it out and have been making this crust recipe for several years now. Technique and the ingredient list are of vital importance, but patience was the key. Stopping and working with the dough instead of forcing the dough is paramount to this best butter crust.

Finding that place of zen and being in the moment with that pie crust. It may sound cheesy, but my best pie crusts are the ones where I lose myself in the moment and just spend time with the dough.

How Does The Butter Work

When rolling out the dough, we do our best NOT to incorporate the butter entirely. We do not want our rolled-out pie crust to look like a homogenous canvas. Instead, we want spots of butter to appear throughout the dough.

It is critical to make sure that our butter gets frozen appropriately and the dough is cooled sufficiently. The steps outlined in this recipe are in place to ensure the desired spotting of butter.

When baking, this butter goes to work. It starts to evaporate and creates air that manipulates the uncooked dough. This expanding and release of moisture from the chunks of butter is what gives the dough its flakiness.

Water in Our Pie Crust

When making the dough, we must add water to it. We want to make sure our water is cold. Usually, I fill a dish with ice and cold water and use that. The temperature of the water is the easiest part to get right.

The other variable in this best butter pie crust is how much water to use. The only honest answer is to say that you need to use as much water as is needed.

Super helpful, right? If we add too little water, the dough can be impossible to roll out. If too much water is added, the end product will be leathery and not flakey.

I start with ½ cup of ice-cold water for two pie disks. I add the water slowly, and I make end up adding more water as time goes on. After I added some water and tossed it in, I will take my hand and squeeze some of the dough.

I want it right at that point where it will stay together in a clump but still be a little crumbly. It will be at a place where it will be able to form into a disk and put in the freezer.

Once I get to the point where I have the discs ready to get in the freezer, we should be at a point where the butter is still in chunks, and the dough disks have enough water to keep them nicely clumped together.

This is where the freezer is essential. If the disks are too warm, the butter ends up melting into the rest of the pie crust when we roll it out.

If too cold, we have a rock that is impossible to roll out. I have found that twenty minutes in the freezer creates an excellent pie crust disc that is a perfect temperature for rolling.

Back to the baking zen

The crusts are rolled out after they have spent a little time in the freezer, and this is when it is critical to be patient and find that place of zen. If you are too aggressive with the dough, it can end in disaster.

Still, you have to work with it to manipulate it into a perfect pie crust. Let the dough balls guide you.

Don't substitute or vary on this recipe. The thing about baking is that it is a bit more precise than most stovetop recipes.

I recommend using these crusts right away. That said, you can freeze the dough balls, but make sure to thaw them entirely in the fridge before use... and then put them back in the freezer before rolling, per the instructions.

You can also make a pie and freeze it as a made, but unbaked pie. Make sure to cover tightly and also to thaw in the refrigerator before baking.

Pies go as far back as the ancient Egyptians and Sumerians though more often used with meats. Some neat history!

What makes butter pie crust different from lard or shortening?

Butter is a bit more difficult to work with, but makes very flakey and tasty crust.

What does butter do to pie crust?

When baking, if done appropriately, the pockets of butter evaporate and create little pockets in the dough that make it flakey.

That is awesome, and thank you so much for giving this Butter Pie Crust recipe a try. If you could leave a rating in the comment area below, it would be greatly appreciated. This lets me know how I am doing and also helps others decide if they want to make this recipe. Most of all, thanks for visiting Ramshackle Pantry.

Butter Pie Crust makes some of the pie crust. No matter what kind of fruit pie you are making, this flour based pie crust can make the tastiest, flakiest crust around!