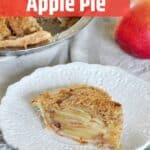 🥧 What makes this recipe special?

A Dutch Apple Pie is an apple pie, but the top crust is replaced with a tasty streusel layer. The filling and bottom crust are basically the same thing as the traditional apple pie recipe. It is the topping where this recipe gets special.

Really, I think a Dutch Apple Pie can be just as good as the traditional one and is a great way to change things from the normal. I love a nice, flaky top crust like a traditional American Apple Pie, there is something to be said about having a nice sugar-based topping that most flakey crusts don't have.

Also, a Dutch Apple Pie is easier to make. A nice, flakey crust can sometimes be challenging to get down. I made many different crusts before I finally decided on my final pie crust recipe.

Then, I made many more pie crusts before I felt comfortable with the process. The bottom crust can be forgiving, as it holds up a pound of apple/sugar mix. Streusel is just mixing some stuff together and sprinkling it evenly!

Of course, if you are looking for a different pie, check out our Blueberry Pie or Homemade Rhubarb Pie. No matter what, make sure to treat yourself!

Many of the same ingredients as a traditional apple pie, but with some extra deliciousness with the streusel top.

For the apple filling, mix finely sliced apples with sugar, flour, cinnamon, and nutmeg. Set that aside for 15 minutes while you work on the other parts.

Place the apple mixture into a pie tin that has been lined with pie crust. Place the filling on top.

Bake at 425° for 35 minutes with tinfoil just around the edges of the pie crust. This helps ensure that the crust does not burn.

At 35 minutes, remove the tinfoil and check every five minutes. Remove when the top looks done and the crust is golden brown. Allow to cool for a bit and then EAT,

There are a few ways you can change this Dutch Apple Pie up a bit.

This pie can be kept at room temperature for up to two days. It will keep it the fridge for up to a week. This pie will also freeze well.

The only apple native to North America is the crab apple. The settlers brought nearly all of the apples grown in America. Many were new strains of apples were created in America after they were brought here.

While Apple Pie is considered an American icon, Apple pies have been made around the world for a very long time, even before America was found by the west. This is a print of a 14th-century apple pie recipe. We all know that in 1492, Christopher Columbus sailed the ocean blue, right?

What is the difference between Apple Pie and Dutch Apple Pie?

Dutch Apple pie has a streusel topping, unlike a traditional apple pie with a pie crust top.

What is the difference between a Dutch Apple Pie and a French Apple Pie?

Even further, I found some that say the French Apple Pie is what we traditionally call American Pie. I did try to find the answer to this, as I was really interested, but this one is going to have to be stored away in the annals of pie mysteries. Unless, of course, you have the answer. I am always interested in your thoughts on what the difference between a French and Dutch Apple pie are.

That is awesome, and thank you so much for giving this Dutch Apple Pie recipe a try. If you could leave a rating in the comment area below, it would be greatly appreciated. This lets me know how I am doing and also helps others decide if they want to make this recipe. Most of all, thanks for visiting Ramshackle Pantry.

This Dutch Apple Pie Recipe is a sugary and easy twist on the classic apple pie. Get all of your apple pie flavors with an bit more richness from the yummy struesel topping!